"If you keep pedalling you'll get there eventually."
Alastair Humphries, who cycled 46,000km in 4 years

The good news is that there is a whole world out there and almost all of it is good for cycle touring. There are very few countries that are completely duff on a bike. So, don't feel you have to follow the well trodden paths listed below. Find somewhere that looks interesting and give it go.

In general, I find poorer, less developed countries are better for cycling than rich ones. The main reasons are: Although it sounds counter intuitive, it's best not to go out of your way to go to somewhere very flat. You'll be bored if you do. Some decent sized climbs are really essential for a memorable tour.

There are some example of routes and places to go below. It is not intended to be exhaustive. Just because I haven't mentioned a place it doesn't mean it's no good, just that I don't know much about it.


Here are some routes if you have a gap year or two to play with.

The big one. Across Europe to Istanbul then through Iran (if you can get a visa) and Central Asia to China and on down through South East Asia.
Cass Gilbert's trip report.

The length of the Americas. Never too far from civilisation.
Gregg Bleakney's trip report.

Anybody who has been to Africa will know how much it can get under your skin, Quite a tough ride. Ethiopia has a reputation for being one of the toughest countries to ride through due to the attentions of stone throwing kids.
Dave Briggs' trip report.

If you want to avoid other cyclists and go somewhere less travelled, try Russia. Watch out for the mosquitos in summer.
Mike Vermeulen's trip report.

My favourite part of the world. Don't be put off by the big hills and thin air, this is great cycling.

Dushanbe-Osh, 1,200km, max altitude 4,655m, 50:50 paved/tracks
A very remote and stunning ride through this little visited former Soviet Republic of Tajikistan. Rough tracks, stunning scenery and some of the friendliest and most hospitable people on earth.
My trip report.

If you are interested in joining a supported tour to Tajikistan, I have been working with Red Spokes to arrange a tour to the Pamir Highway in July 2008. More info on the News page or click the logo to go to Redspokes' site.

Rawalpindi to Kashgar, 1,300km, max altitude 4,730m. mostly paved
A well established classic that passes through some amazing mountain scenery. Slightly diminished now the Chinese have banned cyclists from cycling over the summit of the pass. The lower section through Kohistan can be a bit dodgy. Possible to do without camping gear.
My trip report.

500km, max altitude 5,000m, mostly paved
From the lush hills of Himachal Pradesh to the barren mountains of Ladakh. A short very accessible trip. From Leh, you can climb the Khardung-La Pass, at 5,600m the highest motorable road in the world (allegedly).
Trip report from Steve Pell et al.

Lhasa - Katmandu 960km, max altitude 5,300m, mix of paved and tracks.
A classic pedal over several very high passes with the possibility of a detour to Everest base camp. Finishes with an incredibly long descent to Katmandu.

One hears very mixed reports about cycling in India. Some people love it and others really hate it. Some of the main roads can be very unpleasant and most cyclists find the lack of privacy and constant attention from the locals very trying. Up in the north, in the foothills of the Himalayas this is much less of a problem.

Another of my favourite places. Great landscapes and pretty cheap. There are endless possibilities on this continent. Here are just a few:

Remote, wild country in the foothills of the Andes.

The most time I have spent in North America is 12 hours in a hotel next to Miami airport, so I am not best qualified to comment on this region. However, The Adventure Cycling Association is a good place to start if you are considering cycling in the USA. They have established a network of long-distance cycle routes that follow secondary routes or tracks. These include "The Great Divide" a classic, 3,500 km North-South route through remote mountain territory, principally on dirt tracks. Another classic is the Pacific Highway from Vancouver to San Diego. And of course there is all of Canada and Alaska....

Of the Western European countries, Spain and France get the best feedback from cyclists - these countries have lots of great scenery, plenty of quiet secondary roads and reasonably considerate drivers. Cycling on Germany's roads is not that pleasant, but it does have lots of cycle paths. The Netherlands probably has the best cycle paths in the world, but it is a little too flat to be interesting. The UK isn't the best place for cycle touring - there's just too much traffic and the weather is pretty unreliable. However, if you do want to tour in the UK, Northern Scotland is probably the best bet - great landscapes and quiet roads.

Classic routes in Europe include:
Spain: The Via del Plata. Following the old pilgrim route from Seville to Santiago de Compostela. Approx 1000km, mostly on tracks.
Germany/Austria; The Danube Cycle way. From Passau to Vienna and on to Budapest if you want. Approx 350km Very flat, very civilised biking.
UK: Lands End to John of Groats. The length of Britain, huge mixture of roads and scenery (and weather) 1,400km.

Good cycling. Relatively unspoilt, not much traffic off the main roads, pretty cheap, easy wild camping, good beer.
As I haven't got a Middle East section, I'll mention Turkey here, Turkey is a huge country and it's good cycling. We had a great time cycling around the Sea of Marmara and Galipoli. It's cheap and the people are very, very welcoming.

"Beautiful but expensive." This was my original comment on Scandinavia (mainly based on the cost of having a beer). I have since been corrected by Mirjam "CyclingDutchGirl" Wouters. www.cyclingdutchgirl.waarbenjij.nu She wrote:
"I loved cycling in Scandinavia and didn't find it too expensive at all! Mainly because its the law that everybody can camp out free. And especially the Swedes are lovely - they gave me lots of food and shelter and in many places the 2nd cup of coffee was free! Also, nearly every village has a sportfield or run track where you can use the showers. And Norway must be the most beautifull country in Europe (in my opinion)." So there you have it - thanks Mirjam.

Iceland was pretty much off my radar, so I am indebted to Ruth Naughton for putting me right: 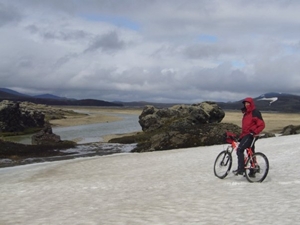 "Iceland is a perfect place to try out adventure cycling for beginner cycle tourists. It has a main exterior ring road that is well surfaced and goes round the whole country. A lot of cycle tourists just travel this road and it is fairly pleasant with lots to see. You can do it in three weeks at a push. There is also several interior routes through Iceland, and they are unsurfaced and you will meet rocky roads, mountain passes, sand and have to cross streams and shallow glacial melt water rivers! These roads are closed until Late June and then open until September. There are two main routes through the interior, one takes about 2-4 days depending on speed and weather conditions and is an ideal way to sample wild conditions to test your ability! The other is longer and much more arduous, 6-8 days, and is a good challenge.

Iceland is beautiful, with hot springs, lava flows, snow topped mountains, iceberg lakes, volcanos, deserts, green valleys, all in a small country. The people are friendly and its not even that expensive at the moment with the crash. Good cheap camping is the main form of accommodation, but it is also fine to camp wild anywhere other than national parks.

I really recommend Iceland for people who don't have much time or are just starting out. You can go for a few days on the outer roads to warm up then head into the interior to test your skills and prepare for longer world trips- I used it as a learning experience to find out what I needed for future longer and more arduous tours!"

Thailand, Laos Vietnam and Cambodia are all pretty good cycling destinations. The food is good, it's possible to travel without a tent and roads, are pretty quiet.
For more information on this region see Simon Stewart's excellent site www.silkwheels.com