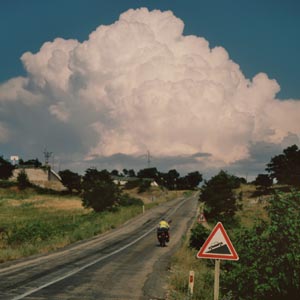 Adventure cycling is pretty safe. You hear very few reports of any cyclists being robbed, attacked, injured or killed. Many men and an increasing number of women, do long tours on their own, through very wild places, without incident. You really don't need to worry too much, but this section contains a few tips and precautions that will help keep you safe.

One of the things that keeps you safe when adventure cycling is looking too poor and too stupid to be worth mugging. You can cultivate this image by:

At only Ł5 each, a Hi-Vis waistcoat is by far the best value bit of safety kit you can get. Wearing them in urban traffic or on busy main roads is strongly recommended. In addition, in some developing countries, the only other people who wear such vests are the police, so motorist are extra wary when passing you. It's best to remove your hi-vis waistcoat when you start looking for a stealth campsite or are trying to sneak past a checkpoint.

Be aware of cultural sensitivies and dress/behave accordingly. In some Islamic countries shorts and short sleeved shirts are frowned upon, as is other revealing clothing such as skin tight lycra. So, if you want to go unnoticed, dress conservatively and get some light baggy trousers and a long sleeved top to cycle in.

There's no end of debate on cycle forums about the pros and cons of wearing helmets. In the end it boils down to personal choice based on your perception of the risks. A lot of adventure cyclist take them, but only wear them in high risk situations, such as steep descents or heavy traffic.

Traffic is probably the single biggest risk when cycle touring. The only time I have been sure I was going die on a bike was cycling in four lanes of heavy high speed traffic on the main road in to Istanbul. Guidelines for staying safe are:

Luckily a loaded bike isn't a very attractive target for thieves - a quick get away being a bit difficult. However, an unloaded bike is different question. If a determined thief wants your bike, no lock is going to stop him, so it's not worth carrying a big heavy D lock. However, it is worth carrying some sort of lock to prevent the opportunistic thief - a cable and padlock is probably the most versatile.

To prevent theft, the best strategy is not to let the bike out of your sight. Of course, this is a lot easier to if there are two of you. If you are on your own and you want to do some shopping say, you can always ask a shop keeper or cafe owner to keep an eye on your bike. If you do have to leave it unattended, taking the saddle with you helps make it a bit less attractive.

Most cheap hotels have some sort of store room or garage where your bike can be locked away. Otherwise, you have to take it in your room with you. When you are camping, at night it's best to make the bike as invisible as possible - lay it down behind the tent and padlock it to a tent peg loop.

Aggressive dogs can be a hazard almost anywhere, but they are not that big a problem. The following strategies have all been recommended by cyclists:

In my experience, the best tactic for dealing with dodgy officials, e.g. police or army types, is to appear to be friendly, very respectful, but rather dim (Tim, nice but dim, that's me!). So, smile, say hello, shake their hands, but don't let on you know any of their language. Keep saying "tourist". Only show them the documents they ask for. And be patient, the aim is to bore them into leaving you alone.

In the Himalayas and the Andes there are a number of routes that take you as high as 5,000m. This is high enough for the effects of altitude sickness to be fatal. The good news is that if you pedal up to this sort of altitude from sea level, you will have time to aclimatise progressively and be reasonably fit by the time you get there, thus reducing the risks significantly. You are at a much higher risk of altitude sickness if you fly into places like Leh, Lhasa or La Paz, that are already at around 3,000m, and immediately start pedalling. In these cases, it is vital you take some time (a few days at least) to aclimatise. Important points about coping with altitude are: